A COUPLE FROM NEW ZEALAND IN THE COFFEE CAPITAL OF COLOMBIA

A COUPLE FROM NEW ZEALAND IN THE COFFEE CAPITAL OF COLOMBIA

A brief story of two touring cyclists at home:

My name is Mauro, I am a mountain-biker from Sevilla, the Coffee Capital of Colombia.

The first time that I heard about Warm Showers web page was 6 years ago when a friend of mine told me that he had hosted lots of touring cyclists from different countries in his house located in Tuluá, Valle del Cauca.

Wait a moment! ¿What is a touring cyclist? It is a person who decides to leave his job and reduce his life to 4 panniers to rule the world on a bike. WTF! Yes, it sounds strange, but it is. So, let's continue.

Five months ago I decided to create a profile on Warm Showers with the aim to get to know cyclist from other countries, new cultures, travel histories, practice English language, and show our coffee region with the chosen ones.

On the past December 14th I received a message of a couple from New Zealand, Baden and Shelly Campbell; they had left London (their job place for 7 years) in April on their bikes, and were riding in Colombia since November. In the moment I received their message they were in Bogotá, and they were planning to get Sevilla on December 22th after Alto de Letras climb to get the Coffe Triangle; that was the first time I had contact with a touring cyclist. After talk to my family about it, and had approbation I decided to welcome them in my grandfather’s house in Sevilla.

On December 21th night they sent me a message, It was sort of like “Mauro, we are in Salento Quindío, are you easy to find? We are planning to leave Salento tomorrow morning and start our ride to Sevilla after a Coffee tour in Don Elias farm”. In that moment my heart started beating harder, for me was unbelievable I would have the opportunity to meet a couple that had in their legs more than 9000 Kilometers traveled throughout Europe, Central America and South America. I just gave them my address and cellphone to get me the next day at home.

I thought that they would arrive in the middle afternoon, so I was looking out of the window every 10 minutes after lunch, to try to get a view of them at the moment they arrived to Sevilla. It was almost sunset, and I thought they wouldn’t arrive; I was sad and confused, so I decided to get into home again. I told my aunt Gloria, “I think they are not coming today”, in that moment someone knocked the garage`s door, when I saw in the bottom of the door, I realized that was someone on a bike, because I saw bike tires and cyclist shoes. I was happy; Baden and Shelley had got my house in Sevilla.

I just remembered their tired faces, Baden, a tall and a thin man with red hair; Shelley, a blonde woman with a body of a strong cyclist girl, both of them with beautiful color eyes. Their bikes, what can I Say? Strange bikes, with 4 panniers every one. If you see one, you could think that the bikes are pretty normal, like our grandfather´s bikes “Bicletas Panaderas”, but that bikes had traveled almost 10,000 Kilometers, way to go! Afterwards they arrived home, Shelley gave us a present, a pound of Don Elias roasted coffee, being honest, the best coffee I’ve ever tried; and a Guanabana which I think they didn’t know anything about that strange fruit, they just told me they bought it on the road between Pereira and Salento. It was funny because it’s my favorite one!

At night they were pretty angry, and for first time in Colombia they would eat Tamal (Popular dish from Tolima department). They almost ate the left on which the Tamal is prepared (don’t eat it never), I mean they were really hungry. We talked about their travel in the coffee region and about their amazing experience in Colombia, which qualify as exceptional.

Later they took a warm shower, and then while Shelley started working on their “Podcast 29” I went with Baden to get around Sevilla’s night; I showed him Concordia’s and Uribe’s parks, but I thought that they was too tired, so before got back home, we stopped at the Pandebono’s house to buy Pandebonos.

When we arrived home, Shelley was finishing her Podcast part, and they ate Pandebonos with Café Ginebras, they were stunned with the sparks of taste of that mix, I could see the expressions on their faces.

First night, they had a good rest in the cyclist bedroom.

Next day, they woke up early, drank some coffee and a home breakfast, made of eggs, arepa, bread, chocolate, buñuelo, etc. They were so glad to stay with my family. During that morning they sent emails, checked their blog, the podcast 29 was finished and respectively uploaded to www.howareyouwhereareyou.com.

In the afternoon, we went to getting around Sevilla area in my uncle’s car, an old SJ410 Suzuki which was really hard to start and drive; we also went to Manzanillo village to see the landscape that the western Andes mountain range showed us while we were in the middle of a coffee plantation. They only said “amazing”, “we are sad to leave this region”; expressions that make you feel proud to live in a beautiful place of Colombia. Later afternoon, we went to visit Luz Helena, a friend of my family who prepared us the best Guanabana juice in the world. Shelley and Baden asked for a refill, they were delighted.

The second night we went to Arepas.con to eat “arepa rellena” with chicken, meat, and pork rind a.k.a. “chicharron”; while we ate it, my cousin Dany convinced them to stay another day at our house, we wanted they to spend Christmas eve and Christmas day with us; It was nice they accepted the proposal, because the next day they would have the change to meet my mother Mariela who were working in Armenia.

After eating dinner, we went to a popular and traditional Café-Bar “Casa Blanca”, located on a corner of Uribe’s park, they heard some Tangos, Milongas, and drank Café de Colombia. It was funny when we asked for the bill because Shelley offered to pay the bill of all us, and it cost about 5000 Colombian pesos, Shelly couldn't believe because in London they used to pay about 20,000 per a cup of coffee. When we were getting back home, we took some pictures on Concordia’s park, and we passed for Pandebono’s hose to buy more “Pandebonos Calientes” with “Pony Malta”, Baden liked it so much.

On December 24th, we woke up at middle morning to get ready to go to see minimarkets in Sevilla, introduce them some relatives too; they met my father Jhon, Grandmother Zoe, Cousin Jose and his mom Maria Zoe. We also tried an Amazonian fruit, the “Açaí” that my friend Leidy sells in her small coffee shop called “Café-Cafeto” in midtown. When we got back home, my mom had arrived, and she gave them a present, a “Poncho”, Shelley was touched and started crying. Now, Can you imagine how people from other countries appreciate the Colombian culture?

Midday, Baden asked for lunch, he always was angry (I am just kidding Baden hahaha), my aunt’s answer was “tenemos frijoles”. While we ate lunch, we were planning to prepare “La Natilla”. So, that was the plan in the afternoon. While Shelley was trying to communicate with her family in New Zealand, Baden helped my aunt to stir the Natilla, I think that he thought that it was harder than ride 100 kilometers uphill (you know what I mean Baden).

We had spoken about beers that they tested in Europe, so on Christmas Eve we went to Jagger Café-Bar to test craft beers, Chapinero Porter, Monserrate Roja, and Cajica Honey are some of the beers that Bogotá Beer Company make in the Capital of Colombia. We enjoyed the time we spent there telling tales, and enjoying the music. Shelley ranked Monserrate beer like her favorite one, and Baden felt like home after listening to "Home Again of Shihad". We got back home to have Christmas dinner with my family, afterwards we were reunited at the living room to share Xmas time, the surprise of Xmas for my touring cyclist was that baby Jesus gave them gifts, a pair of cyclist socks for both (I know that you are smiling guys). It was a nice moment; we drank a glass of wine and went to bed.

On Christmas day, we left Sevilla at 8 o’clock to get Uribe, I was the travel companion to there. On the route Baden left me ride his bicycle, it was an unbelievable moment in my life because I was riding a bike of 70 kilos; it was really tough because on that smooth uphill I remember that the velocity was not more than 8 kilometers per hour; even follow Shelley’s pace was really hard; they only smiled looking at my tired face while I tried to catch liters of oxygen to go up.

On the route we also recorded parts of their next podcast on the route between Sevilla and Uribe, I talked them about stories about a demon that appeared on a corner on the last climb to Sevilla, a beautiful ghost woman who used to appear on the "Vuelta al Violin" to truck drivers during night. The Vuelta al Violin is remembered because the Vuelta a Colombia used to pass on it, also.

We had to say goodbye in Uribe because they had to continue the adventure to the south of Colombia, it was one of the saddest farewell I have ever felt.

Baden and Shelley, you were and will always be part of my family.

I love you guys! Keep going! Hope to see you soon! Successes in the adventure of a lifetime! 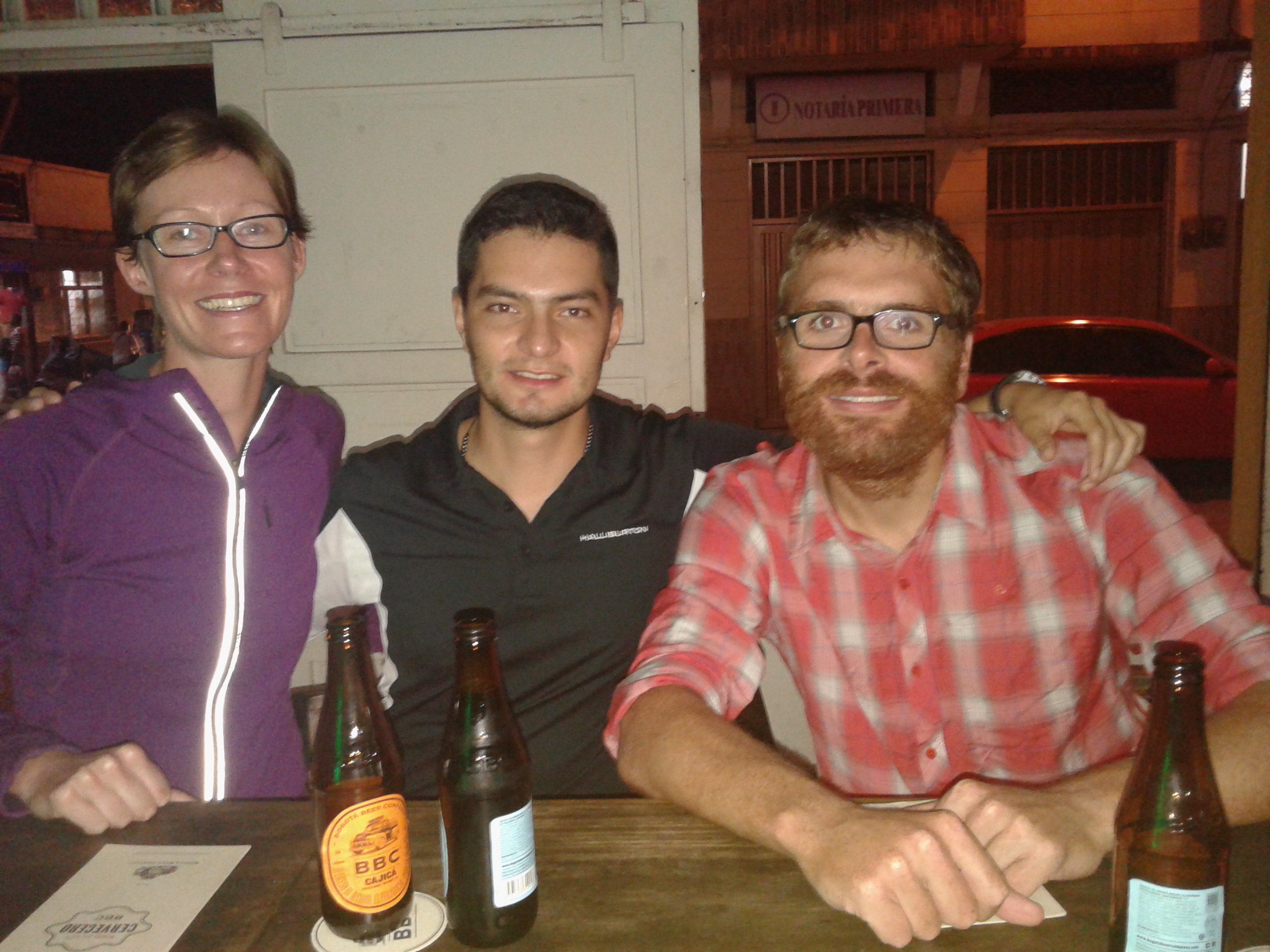 I invite you to do a cycle tour in Iran, it is a great country for touring cyclists!

Hey Farid, thanks for taking your time to read my post.

It was a nice hosting experience with Baden and Shelley.

You are welcome in the coffee region in Colombia too!

Hi,
Loved reading your post about hosting Shelley and Baden. You were very kind to them. I am from NZ too. Hope they were well behaved!,
Happy hosting,
Jenny

It was my first experience as a host! I hope one day to have the opportunity to rule the world on my bike!

Thanks for reading my blog! I enjoyed doing it!

Definitively It was such an amazing experience with Bade and Shell.

Hope one day ride my bike in NZ!

Really is a nice and lovely couple. We hosted them in Chinchinà y was very sad when they go away. We continuing hosting cicloturista like Baden and Shell. Come her on bici that we attend you in all. Cheers¡¡

Thanks for commenting my blog! I had a nice experience with them, they are an unique couple. It´s good to know you had the same chance to meet them and share your house with Bade and Shell. They were my firsts touring cyclists, and I hope to have more experiences with.

Thanks for the invitation to Chinchiná, I hope to meet you soon!

You are welcome in Sevilla, too.